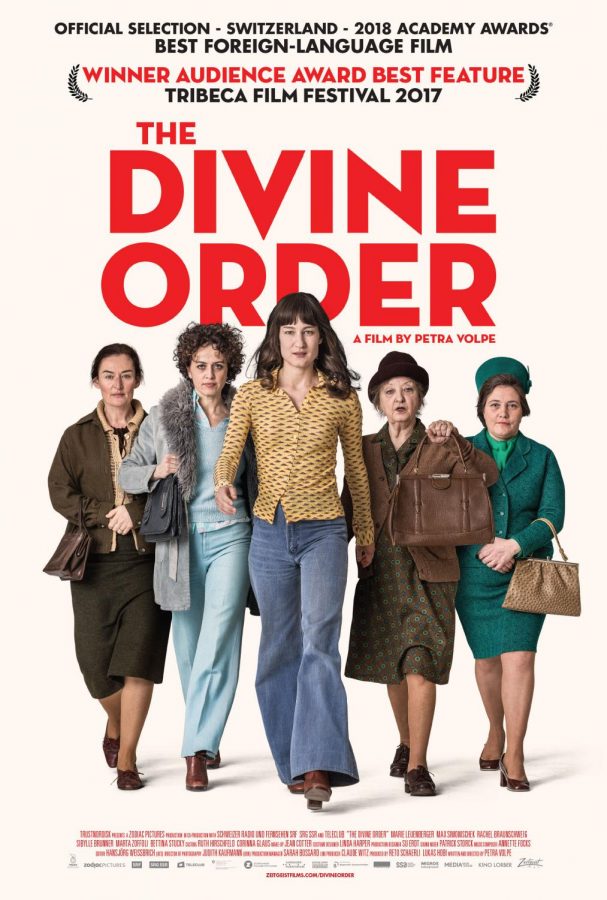 Struggles come with every movement — and those who are involved face external and internal conflicts, such as trying to successfully reshape the collective, but then possibly losing themselves along the way. Let’s take a step back into the 1970s to zoom into two different political climates.

The United States is facing a counterculture movement. Our society saw the rise of Woodstock, protests, and anti-war sentiments. At the same time, we struggled to achieve new heights for American feminism, but kept a steadfast mindset as we climbed this peak.

Panning away from the U.S., the landlocked country of Switzerland was the antithesis of the States. Along with rampant suicide rates and a deep fear of change, Switzerland seemed to be perpetually framed in the rural 1940s.

Writer and director Petra Volpe takes on a personal and comedic political setting in her film, “The Divine Order.” We meet Nora (Marie Leuenberger), a woman who was raised to be a simple housewife, but discovers that being simple does not quite equate to feeling fully fulfilled.

Initially, she holds a single desire to take on a job at a nearby traveling agency, but finds herself on a journey to secure suffrage for the local Swiss women in her community. Yes, Swiss women still had no voting rights in the ‘70s. In fact, many citizens voted in opposition against the women’s rights movement, and women who had the desire to vote reasoned themselves to agree with the vast majority.

Volpe enhances the seriousness of the film by striking her characters’ intuitions with humorous, yet reflective situations. Nora is able to explore her own version of the counterculture and opens her “third eye,” as she dances to ‘70s disco music, enters a sexual awakening, and shows how she is also able to wear the pants in the family, literally and figuratively. Her naïvete is astoundingly refreshing and fun to watch. However, these moments are so purposefully bittersweet. Many women just like Nora were so out of touch with who they were and had lived in this shadow of ignorance that was cast by their society.

While the spectrum of the film is predictable, lighthearted and earnest, the acting is what truly creates the film. Volpe cuts through her broad display of women’s suffrage by closing in upon the personal lives of these women.

As an audience, we are able to see the naturalness of raw family dynamics. These women are rushing towards the finish line to gain their rights; but at the same time, they face the motions of changing the lives of their loved ones. Volpe conveys the idea that the liberation of women is a liberation for both sexes.

During a post-screening Q&A for the film at the Palm Springs International Film Festival, the director explained how she purposefully used two brothers and their father to express the generational discrepancy in beliefs, stating, “[Liberation was] not a battle of sexes, but a battle of culture and attitude.”

Leuenberger and Volpe partner up to portray the feminine struggle and depict the pressures held against women of that period in an individualized perspective. As Nora’s character develops, she builds up her strength to face the unfairness of the law, pick up the pieces of her family, and transform the beliefs of her community.