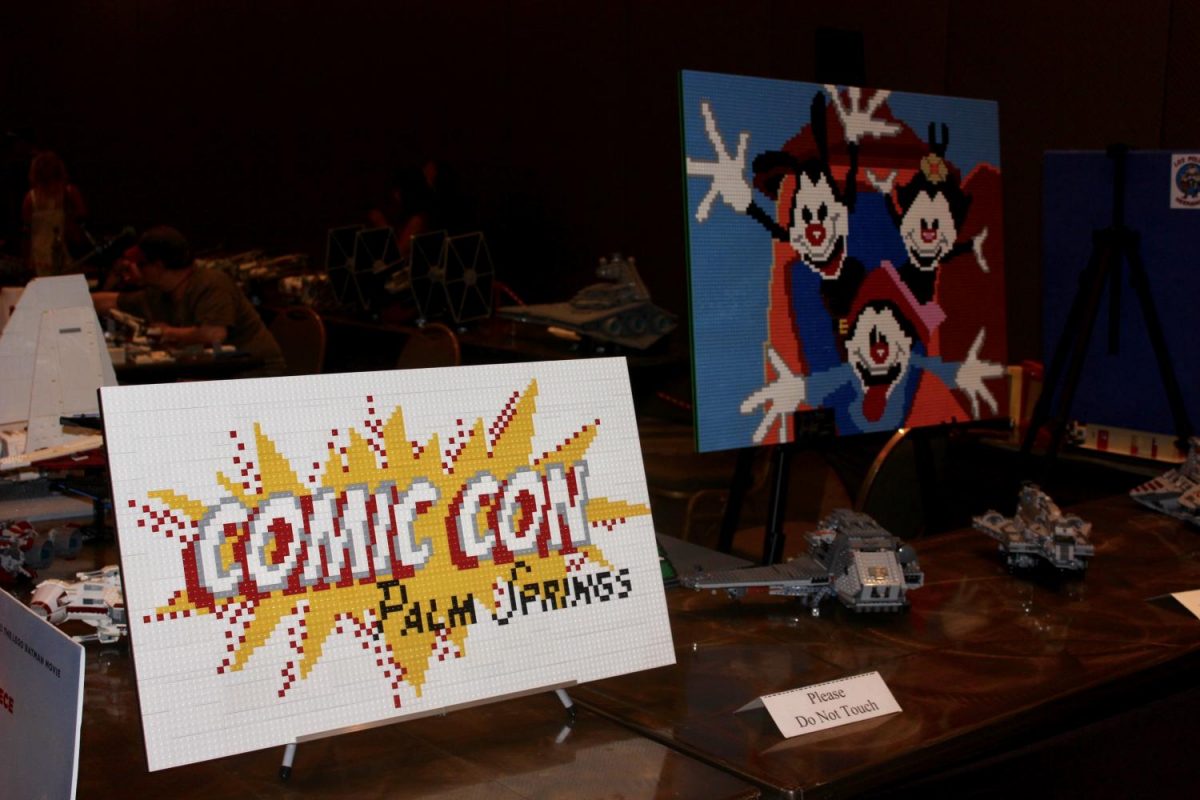 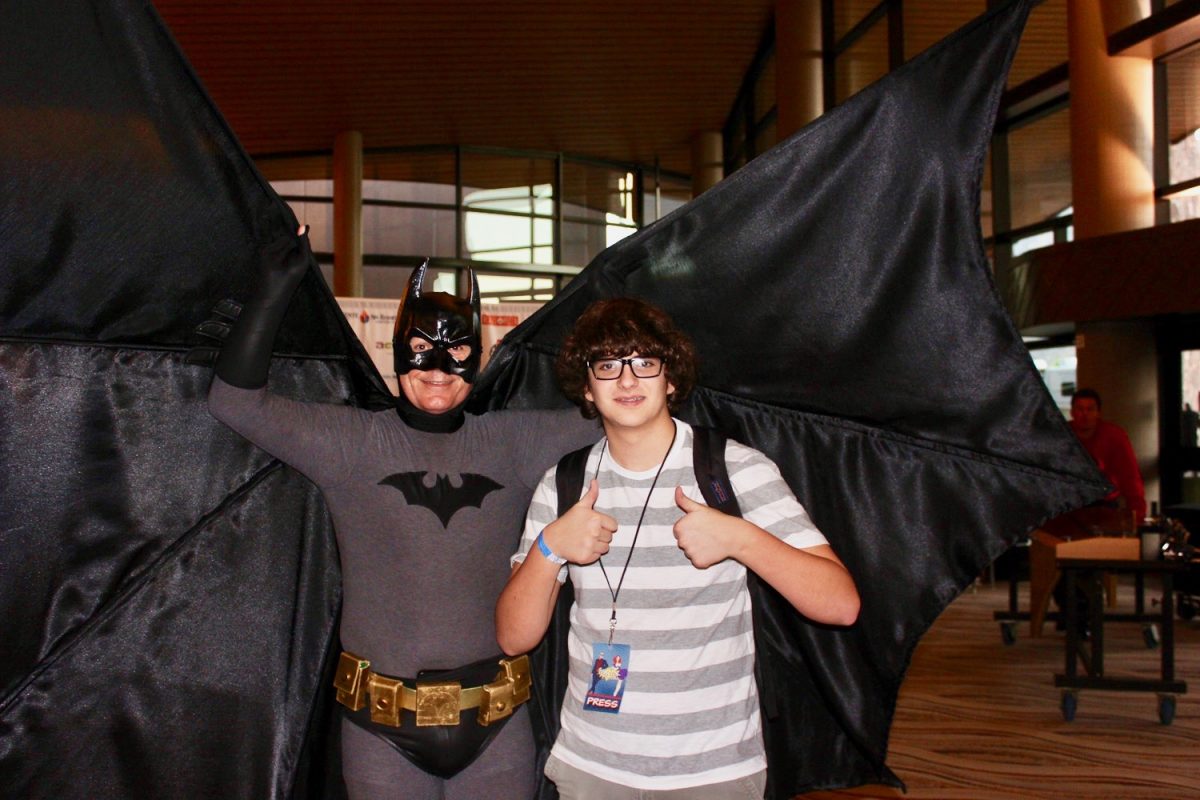 Over the weekend of August 25-27, I had the pleasure of visiting the Palm Springs Comic Con with my classmate Juan Puga (10).

I have to admit that I wasn’t expecting much. Conventions in big cities have equally big panels and events and are filled with famous artists and animators. I was quick to draw conclusions: the desert is small and filled with old people, so I figured the convention would probably reflect this.

Imagine then my surprise when, upon arriving, Puga and I were immediately greeted with a huge school band dressed in shirts with the logo from Pixar’s “Incredibles,” loudly playing Star Wars music and comic book fanfare in front of the entrance.

I was a little alarmed and a small amount of blood had begun to emerge from my left eardrum, but I was impressed. We hadn’t even entered the place yet and we had already had our senses attacked by superhero references. My excitement and my anxiety both rose considerably. I wasn’t ready.

After being told that we weren’t at the right entrance several hundred times, we finally arrived at the registration area. We received a sense of smug satisfaction when the security guard showed surprise at us getting press passes, which was quickly dispelled when we realized that they weren’t actually any fancier than general admission passes. (By the end of the weekend, I had accidentally ripped my pass off my lanyard three different times.) With this, we finally entered the convention.

Booths with art, comics, props, and toys lined the convention floor as far as the eye could see. Men, women, and children dressed as their favorite characters took photos together. Everyone looked like they were having a good time. As we began to walk down the aisles we were handed often shouted at and handed a business card. I was fascinated, but still weary.

Call me a wet blanket, but I’ve never been a big fan of, well, fans. Even if I consider myself to be a fan of something, the idea of a group of people obsessing over said thing and forming a fandom has always been disconcerting to me. I totally understand why people would want together with other people who like what they like, and all the power to you if you choose to do so.

But in practice, I’ve always found it to be, for lack of a better word, uncomfortable. Maybe it’s my introvertive nature. Maybe it’s a feeling of faux superiority. Whatever it is, super-fans have never been my thing.

Which, as I’m writing this, has led me to wonder: why did I volunteer to report on an event dedicated to exactly that? Maybe I’m just a glutton for punishment, but as I walked those halls I found myself enjoying the con nonetheless. People were having fun and bonding over similar interests. So as long I wasn’t directly involved, I was happy to see other people happy.

Being a cartoon lover and a former animator, it was wonderful seeing all the artists next to their work. Many sat next to drawings of themselves in comic form, which often presented a fascinating look into the artist’s self-image. Original hand-painted cels from “Spongebob Squarepants” were sold and I will forever hate myself for not buying one.

I asked about a t-shirt with an orange and a bunny on it and crushed the kind artist’s dreams when I realized I forgot my wallet at home. (I later found out it was in my backpack the whole time. I promise I’ll buy your cute shirt one day!)

Comic artists bragged about their original works, their brazen confidence both off-putting and admirable. It was with the art that I found the most joy in at Comic Con.

We also got the privilege to take pictures of cosplayers at the event, at least until our SD card ran out of space. In these cases my classmate taking the picture would turn on the flash and tell the costumed subjects it turned out great. I wanted to die.

Speaking of wanting to die, Puga and I talked to a lovely artist who directed us to the Zombie Cafe. As much as we appreciated the kind vendor, I can’t help but wish we had never taken her advice and instead went literally anywhere else. Inside the Zombie Cafe was, in full zombie makeup and attire, the worst stand up comedian of all time. (Puga says he was funny, I have since cut all communication with him.)

The corpse at the front of the stage was trying his absolute best to make us laugh, but after everyone in the room, included the volunteer workers, hid our faces and cringed, he began to direct the jokes at the only person in the room enjoying them – a child no older than three. I have to admit, I did laugh during the performance a few times, but that was because an extremely annoyed patron hurled sassy insults and comebacks after every joke the comedian made. I wish we could have gotten her on the stage.

After we took pictures of more cosplayers, wrote some notes on the experience, and exited, we waited to be picked up and were able to catch the start of the Zombie Run taking place. People covered in (hopefully) fake blood screamed and shuffled across the road. One participant dragged a rake across the street, sending sparks flying and almost setting his fellow undead on fire. The Zombie Run served as a testament to the dedication and love the attendees had for nerd culture.

Our trip to Comic Con was an exciting and surprising one, and I’m grateful to have had the pleasure of going. I would like to say thanks to Ms. Cortez for giving us the opportunity, thanks to everyone at Comic Con that we were able to talk to and sorry to the editors for making this so long. We’ll stick it on the website, or just make the newspaper font really small.

‘A Celebration of All Things Nerdy’ 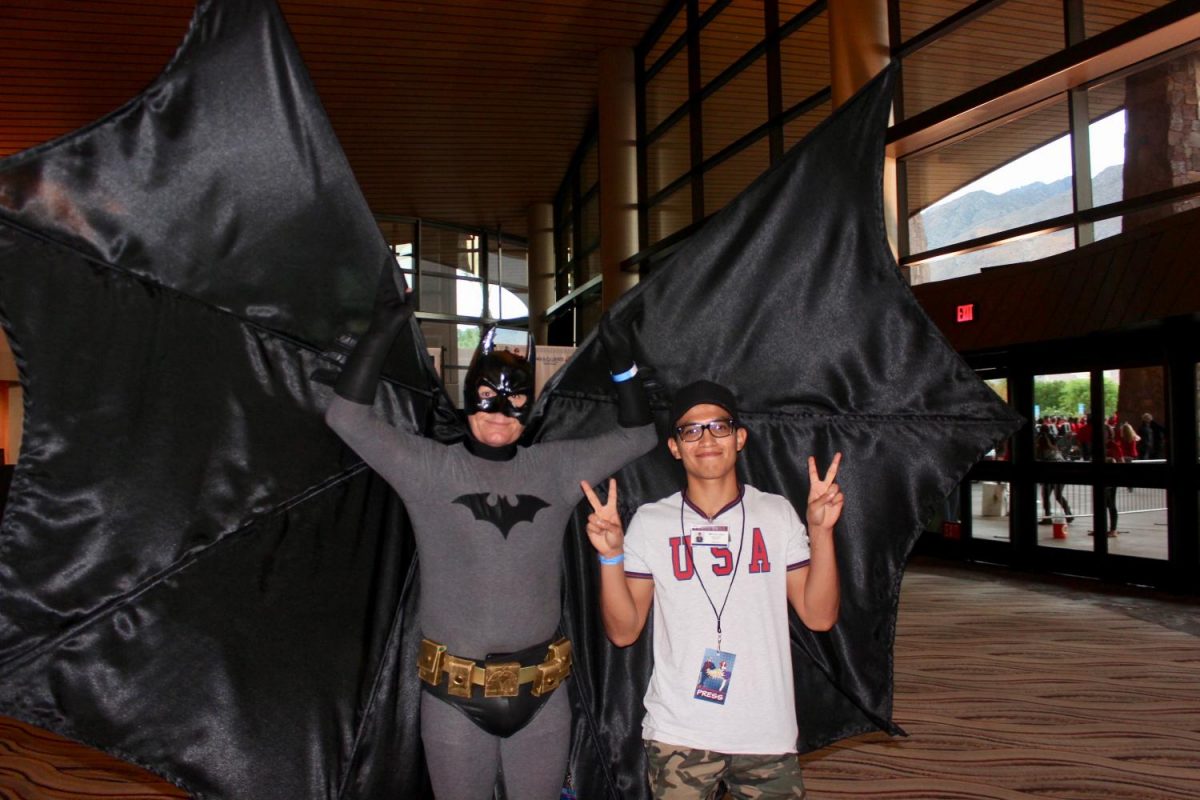 From August 25-27, the second annual Palm Springs Comic Con kicked off with a bigger and badder send off than ever. This year’s festivities built upon last year’s mediocre success with even more exhibits, stands, activities, and celebrities than before.

Opening with the iconic Star Wars fanfare played by the Palm Springs High School band; the attendees were hyped up as they entered the Stan Lee themed lobby.

I was accompanied by fellow reporter, Christian Rodriguez (11), who trailed behind me as I frantically walked trying to look and touch all the expensive memorabilia.

To some degree I was successful, only to be chided by my present company and the vendors themselves. It turns out that people really hate it when you get grabby with a three thousand dollar replica of the fictional sword, Ice, from “Game of Thrones.”

As a regular to such conventions and Rodriguez being a first timer, I took it upon myself to serve as his eager guide. Comic Con is a celebration of all things nerdy, organized by fans for fans. Cosplayers from different fandoms can be found littered throughout the convention center walking around in both painfully detailed handmade costumes and store-bought suits that look just as good, if not better, than the D.I.Y suits.

Inside was a diverse assortment of characters: from carbon copies of comic book crusader Nightwing, the always busting Ghostbusters crew and everything in between.

New attendees were greeted by aisles upon aisles of vendors selling mostly comics and action figures, though there were odd exceptions.

Halfway through the second day, a sharply dressed shady man stopped me for a surprising sales pitch. It was a very brief affair that ended with me wearing a participatory prize of a Spongebob mask while plugged into an electronic muscle stimulator.

The highlight of the three days was a chance encounter with Symmetra from Overwatch, voiced by Anjali Bhimani. Accompanying her was Feodor Chin, the voice of Zenyatta, from the same game.

Striking up some courage, I went up to their booth without any cash at hand. Quickly realizing my mistake, I continued on trying to strike up some conversation.

To their credit, they treated the pair of us quite well, considering we had no money. “It’s our first time coming to Palm Springs Comic Con. [It’s] been a real joy coming out and meeting all the fans,” Bhimani stated.